The gravity of the sun is exactly the thing needed to cause hydrogen atoms to fuse with helium atoms, creating a fusion reactor at the center of our solar system. The gravity of the sun is also exactly the thing needed to capture other bodies, which, in various ways, orbit it. Some bodies orbit regularly, a safe distance away; others are too far away for any benefit. Some are definitely too close (e.g., my Uncle Forehead), while yet others orbit irregularly.

Thus my grandfather, who died in 1967 at the age of 76, six years before I was born. My dad was 26, living at home four years after a tour in the Navy. My dad talked frequently and endlessly about his dad, telling story after story, trying to “regularize,” I think, a terrible upbringing. One criticism I had of my dad, when I was younger, and foolish, was that he made a virtue out of poverty, which really hurt us. Later, another criticism I had of my dad, when I was a little older and a little wiser, was that he would not take care of his wife, which really hurt us, even when we four children were all adults.

Yes, my dad spoke of his dad often, I think trying to understand the effect such a figure—this giant radiating source of emotional fusion—what effect this man had on his own person, the ninth of twelve children brought forth by this towering, physical hulk of a figure who was supposed to never father a child, but who, wounded, brought many forth and wounded them by his wounds, a terrible perversion of the great type of father. 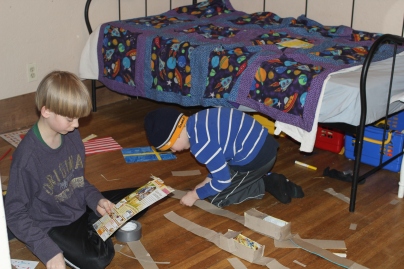 My dad pristinated, that is, he tried to convince us that life in rural Alabama on a farm in 1950 governed by a man driven mad by physical and psychological pain was the best life imaginable. In many ways, considering the geographical setting and the freedom thereof, he is absolutely right. When he brought me to the Mulberry Fork of the Warrior River to relive his childhood and also teach me basic outdoorsmanship, he fostered in me a love for hills, the forest, and running water.

We were swimming in the river, naked, of course, whooping and hollering. He showed me how to cross my arms over my chest and lie on my back, letting the current pick me up and shoot me feet-first through two big rocks into a deep pool. I must have been seven years old. When I came up for air, in absolute exhilaration, I saw him looking up at the sky. A muscle in his jaw went taut. 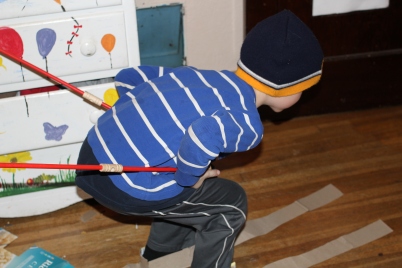 “Run with me,” he said. The tone in his voice needed no increased volume, nor did he need to repeat: he was afraid. We scrambled for shore and heard the first crack of thunder, none of that low, rolling, boom which warns those who live in the flat lands so that they may make preparation: a true crack and smash, a million tin-roofed houses being thrown against the bluffs all at once, announcing the arrival of God Almighty.

We were in a chasm, lined by tall granite bluffs, and they were funneling the energy of this squall upstream from around a bend, right toward us, these stately gray bluffs, mute faces judging us in our nakedness, challenging us to make it home alive. Here it came, and there we went, running upstream, running, tripping, falling, for every tree root reached up, allies of the granite faces, grasping for our ankles. Dad knew the way; I did not. He reached back for me and threw me over every obstruction. It did no good for him to carry me; he would only be tripped all the more easily, top-heavy with his only son.

Sheets of rain pelted us from behind while my dad searched with his eyes up the bluffs, looking for the demi-cave, and, finding it, he switched us back up the bank into the granite bluff. He grasped my arm and threw me into the darkest reach of that overhang, roof black with the fires of Indians from long ago. I buried my face in the sand while my dad pressed himself against me. I heard something like a train pass by, the wail of judgment passing over us, and then I heard my dad sigh. He released me, and we sat on the edge of the cave, sheltered by the overhang. One more blast of wind caused the forest to shudder, shaking loose all the rainwater all at once, much of it around us landing in the river to add percussive rejoicing to the congratulatory shout of the rapids. We had proven ourselves. My dad had proven himself a father.

Love includes proper fear, especially when you love a force much greater than yourself.

The Old Man is dead since 2005, and still I tell these stories, as they percolate while I interact with my own four sons, little mirrors, growing, so that I see my dad increasingly clearly in them, which must mean I see my grandfather in me. The John Duke family, in large part. Sister in black gave birth in November. I’m in the middle, back row. I look almost exactly like my dad did when he was 45.

I meant to start Part 10 here with the word “Anxiety,” but I thought, “No, a metaphor first,” and then it got away from me. The gravity of the sun, you see, is the metaphor for our anxiety, that great big force within us which cannot be defined, not any more than the fusion caused by the sun can be defined. I mean, sure, the science textbooks can show us the movement of the subatomic particles from one atom to another, and they can declare, “And a great deal of energy is released,” just so, but who can imagine such a release of energy? Who can understand the pressing forth of tears? Who can understand the declaration to a veteran of a horrible battle, “You shall not father children”? It is not scientific, not any more than trying to describe to people, “Yes, she suffers from Generalized Anxiety Disorder,” without punching the next guy in the face who says, “Well, why can’t she just think happier?”

Unleashing. We have a proper word for this, see? It is an unleashing of energy. And it, like life, goes on.

Note: I’m going to pause here for a while. 1) I got really sick between Part 9 and Part 10, hence the month-long delay, and, I think, the shift in theme and emphasis. So it goes. 2) There are other things I’d like to write about, and I don’t have all the time in the world, as some people who work in tall buildings in the Greatest City in the World do. 3) I want to return to these topics and write serials about them each on their own. 4) Naturally I will tell more stories about my father and my grandfather because they percolate endlessly. 5) I don’t tell too many stories about my mother and siblings because I’m more sensitive to their feelings, being objects, as it were, of the energy unleashed upon them. Also, they have not been dead for 14 years.