Setting Up the System

My dad was the ninth of twelve, eleven surviving to adulthood.

Mixing the kingly court and the solar system orbit metaphors isn’t original with me, but I wouldn’t be able to cite a popular or famous example of it. I have in my mind’s eye the court of King Henry VIII. If ever there was a fully-detailed example in history of a functioning family system, what with a half-dozen wives and all, it’s the court of King Henry the VIII, tyrant. Surely he made his court orbit around him, inasmuch as one would expect a king to do, but moreso, perverting the expected norms. He was, after all, the Eighth Henry, following a solid five hundred years of growing English court tradition. Yet we all agree Henry VIII is an inflection point in history, whose gravity is still felt in our civilization to this day, history books and learned people arguing to what extent that is true.

Take, for example, Cromwell, poor Thomas Cromwell, who tried to trace his lord’s mercurial paths, not understanding, not until the very end, that Henry had made himself into the sun. From the family systems perspective, Cromwell thought he was his own man, having found a place in the court of a king which gave him right and authority to enact his ideas according to his core ideology, aligning his behavior within the realm created by the king, i.e., Henry’s apparent governing philosophy. However, when he asserted himself in the wrong direction, moving out of his assigned orbit (according to the metaphor), an orbit which Cromwell was not privy to recognize, he was murdered by the king.

Not so much for the living, but for the dead do I change the names. Writing the scenes as semi-fictional keeps the vaults sealed and the graves undisturbed.

All the children were beaten, as was per usual in poverty-ridden Appalachia (northern Alabama is at the geographic tail end of that region), but one of my uncles was a special target. I knew him before he died, and I think fondly on him as a favorite uncle. He was tall, slender, stooped, and had a protruding forehead hanging over hollow eyes. I remember when he’d look at me, his vision, recognition, came from somewhere far distant, then, suddenly, engagement rushed forward, perhaps in an observation or a joke.

If it was an observation, he waited patiently for a response. “Golf is a sport I can neither stand to play nor stand to watch,” he said. He said nothing further until I managed to interact with him. I was…thirteen, perhaps. I had nothing to give him. On the other hand, if it was a joke, he began to laugh before he delivered the punch line, a look of surprise overcoming his countenance, as if he himself had not been expecting the wit. “If they go to commercial, David, it’ll be a miracle if anyone…ha ha ha…comes back to watch golf…” (forced laughing). I laughed politely. He withdrew again.

These things are important, you see. Uncle Forehead’s life was already over, barely in his forties, but he’d long since given up. His career in the Navy had already ended. He hadn’t married–and wasn’t going to. Even if same-sex marriage had been created before he died, I don’t know that he was the marrying type. He had otherwise given up.

A further digression (there are many gears and axles grinding away in a family system): Uncle Forehead’s Navy career began, even though he was a year older than my dad, after my dad’s. When the family was full-sized, that is, when all eleven surviving siblings were actually near at hand, a great-uncle came regularly to the old homeplace, offering a profound opportunity to every single one of his nephew’s children: a free college education. He himself was a medical doctor with a practice in one of the large cities, and he was willing to pay for any and, if need be, all of the children’s post-secondary education. It was written in stone; nay, it was written in the finest blood which had ever flowed through a man’s veins. To pay for college! In the 1950s!

None of the older children accepted. Only two of the younger children accepted. Uncle Forehead was one of them. He was sent off to St. John’s College in Kansas, a preparatory college in the old educational system of the Lutheran Church-Missouri Synod. He was being groomed to matriculate into the St. Louis Seminary to train for the pastoral ministry. It was known far and wide that not only did Uncle Forehead have intellectual qualities head and shoulders above anyone in the entire county, but he was a tender child, a thoughtful youth, a wonderfully caring, merciful individual. When others caught flies, he fought for their release, demonstrating his fine character, a prime candidate for shepherding a pasture in God’s Holy Flock. Everyone set their pride upon Uncle Forehead’s brow: he would restore honor to the family. With great aplomb they sent him off, with parties, gifts, prayer books, and a few dollars, waving goodbye as the Greyhound bus slowly accelerated west.

His stint in the Navy began shortly thereafter.

I have in my mind’s eye a picture of my uncle sitting in the comfy chair, watching golf, cigarette smoke wafting into the curtains. But, then again, I don’t trust my memory on this one. Did Dad let his brother smoke in his house? 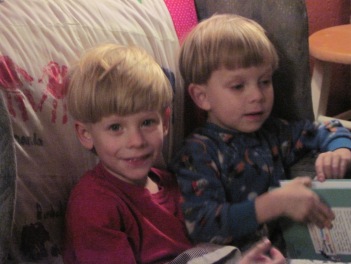 So we have our roles to play, and they are static roles. We are put in orbit, if under the power of an alcoholic, then as by God himself, and if by God himself, then woe be to that one who thinks to change what orbit has been given to him!

I have seen this pattern, for example: in certain kinds of not-for-profit organizations, such as churches, local charitable agencies, civic clubs, and the like, the treasurer’s position is the most radioactive of all the offices in such a club. If a new person should join the organization, that person is very quickly shepherded into the recently vacated treasurer’s position “because the last guy had some personal issues and had to leave our organization. Really, it’s quite easy: just record income and outflow, and give a report at each regular meeting.” Riiiiiiiight…

The new member then seeks to discharge her office with honor and integrity, quickly discovering the radiation emitting from that checkbook. What is it about other people’s money that makes other people crazy? Well, it does. Soon, this honorable person seeks to right obvious wrongs with regard to procedure, and when she does, she is invariably accused of evildoing, insinuating that she is stealing money from the organization.

I’ve seen it a million times, I swear.

My dad told me that his father, the venerable Uncle Joe, had the evil eye for his brother, my Uncle Forehead. They all received their portion of beatings, the sort where mother and father bragged to anyone who would listen (I indeed personally overheard this braggadocio decades after the initial defense), “He back talked me, so I took a leather belt and beat him until I saw blood flow. He’ll think twice before he talks back.” No, he won’t. He’ll talk back twice as much, and with less thought than before, but, oh, well. Nevertheless, this speech was always met with approbation throughout the land (I was too young to judge).

My Dad once spanked my sister, the tenderest of us, the one upon whom my dad conferred every characteristic of his dead sister, because she wouldn’t practice her piano. He spanked us with a belt. On this occasion, it raised a little welt on her baby-soft skin (I can still see it as my mother showed it to him, accusing him before the entire family). He was horrified at himself, threw down the belt and never spanked her again. I cannot remember if he spanked any of the rest of us, but if he did, it was not memorable (he hit me once, but that’s a different story in this saga, relating nothing to discipline, but to unfettered rage, q.v. later).

My dad said he heard a voice coming from the well, a pitiful, high-pitched, inarticulate plea for help. When he peered in, he saw nothing, but he heard his brother, my Uncle Forehead. “Help, please help. I’m cold.” Dad ran for another brother, the brawny one, and they pulled him out. Uncle Forehead was covered in welts from head to toe, bruised, beaten, and nearly dead. My grandfather had beaten him until he was unconscious, then threw him into the well.

What crime had he committed to incur such extraordinary wrath? Alas, it was all part of a familiar pattern, an extreme instance within a perfectly normal relationship. What had he done this time? Who knows? He was the one who could not obey.