The same uncle who offered free education to all my dad’s siblings (whose name was also Joseph, which really confuses things, so I’ll call him Uncle Doctor, because he was a practicing physician in Nashville) visited my grandfather and family every Christmas (you know, the more I write about him, the more curious I am about his character). The late 1940s in Cullman County, Alabama, on an ersatz farm set high up on a 10-acre hill sloping down into some pretty steep bluffs dividing Cullman County from Blount County at the Mulberry Fork of the Warrior River, was an unkind era. It was archetypal Appalachian poverty.

Snow, on the other hand, brings life to this place, an otherwise dead deciduous area, the hills singing those light, joyous songs which come with a surprise of heavy frozen moisture, high enough altitude to get bursts of snow, far enough south that the sun springs to his work first thing in the morning to melt it all away so that a million wooden xylophones play in rhythm as water drops from branch to branch, gaining speed for percussion, landing with prattling rills in puddles, creeks, gullies, and the Mulberry Fork of the Warrior River, first causing a babbling of the woodland orchestra, building finally into the deafening symphony of nature, waters rushing. It really is glorious to walk in the woods the morning after a December snow.

Thus arrived Uncle Doctor, with great aplomb and to outbursts of glee, for he brought glad tidings of great joy in his own person, bearing gifts of nuts, apples, candy canes, and the delight of delights: oranges. He was like another sun breaking through the gray of winter, melting away the fear and un-joy of existence in orbit of the alcoholic’s sun, which lit everyone in its hideous perversion of not-light. Music played in the old homeplace, whose advantage was indeed size, a much bigger house than the little house in Cullman, so that several families could lodge with some comfort for a few days over the great Christmas holiday. Stories were told. Children, fueled by fruit and sugar, ran. Even the hounds panted with excitement.

My dad went to great pains to recreate this spirit for us every Christmas.

I remember, with considerable fondness, driving a half hour from our house in the foothills of North Carolina (the far western and northern foothills between Hickory and Wilkesboro) into the mountains, the Blue Ridge Mountains, in the late 1970s and early 80s, the tail end of that wonderful and violent culture. We were going to get a Christmas tree. There was, perched atop a mountain, a house, an old farmhouse with several gables looking out over the valley.

In that house was a large family, a multi-generational family, with grandma shuffling through the house, trying to help with Christmas preparations, but having to sit for periods of time at several waypoints because her legs were so swollen with some ailment. Children my age swarmed about, greeting my dad, the great Lutheran pastor who condescended up the mountain to be seen with them, who brought them greetings from the Lord himself, with his greater-than-God chesty baritone, “Merry Christmas!” Everyone shouted back, the older ones through tears, “Merry Christmas!” and we were off.

One of the men brought around the truck (memory says it was a 1932 Ford, the venerable), and he and I and one other man and my Dad piled into it somehow. Where the controls came up through the floorboard I could see light framed by ancient rust, and we bumped along a bright red dirt road which became a bumpier dirt path which became stones and grass. The truck would go no further. We piled out. It was much colder than at home.

Here grew a cedar forest, of sorts, ditch trees, that is, skunky cedar pustules dotting the mountainside, yet a tree of this genus and species was precisely my dad’s object. Guided by laughter and happiness of the poor, he made his way until he found the perfect round ball of cedar-y goodness. I helped haul it back to the truck, my sturdy 8-year-old legs guiding the way for the men who were bearing its weight (it was a monster tree) while I held its top with mittened hand.

One of the grandmas, a large scary woman whose smile radiated happiness and warmth into the cold, upon our return shuffled in her pain to grant me the gift of two cookies.

Once home, Dad immediately cut out the top and installed it in the living room, where it took up almost every cubic foot available. The first time he did this, my mom says, she nearly went into conniptions, having been raised in Germany, where a Christmas tree is most certainly a sharply-peaked cone, and not this hideous, burgeoning ball of cedar. But then dad put white lights in its center, whereupon the tree took on a mysterious glow, and then he loaded it with colored lights throughout, making it shine, finally adding the novelty lights on its very outside: bubble lights; flame lights; dancing figurines; frosted snow globe lights; you name it, he threw it on until the tree could bear no more, blazing away in glory. After all the decorations were hung, he then covered it in tinsel.

The beauty of the ditch tree was overwhelming. We four children went berserk. 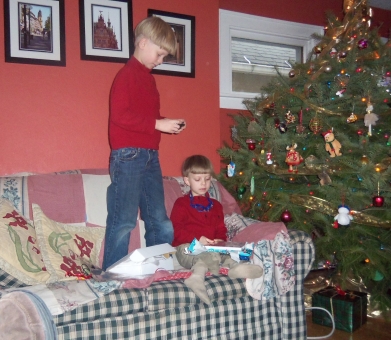 Without money he somehow acquired the most interesting gifts, the master of finding misfit toys a home. Among the junk and clothing was always one, something so perfect, so fun, and usually unheard of: one year it was a game named Bop-Bop-n-Rebop, a battery powered competitive game with a spinning disk. We crept forward to it, afraid of it, in the dark, hearing Santa Claus depart from our roof with a gust of wind and a play of sleigh bells, until finally one of us was brave enough to turn it on. It buzzed loudly with a motor within, causing us to start back in thrilling fear. What was it? We played that game for years.

Another year my dad found a plastic spaceship-shaped—how to describe it? Within it were thousands and thousands of army men colored alternately red, white, and blue, armed and equipped for deep space exploration, whose container unsnapped and laid out to become a map of the moon or some distant planet. It became my favorite toy through the rest of my childhood.

Singing dominated our celebration, with dad ensconced high on his throne, breaking open walnuts or peeling oranges, popping the flesh into his mouth, which was wide open with laughter and song and smiles. At that moment his sole purpose in life was to give us joy.

During the week he presented my mom with a jar of pickled herring. She pried it open and likewise popped the flesh into her mouth, washing it down with a glass of peppermint schnapps or vodka, causing her cheeks to flush rose and lips to burn bright red. Her eyes shone, and he and she disappeared for a while, leaving us children to frolic noisily, under the power of those lights, the sugar of very many cookies and chocolate candy, and so many wonderful toys, indeed, under the power of the song of the very rushing waters of the joy filling all the earth with gladness. 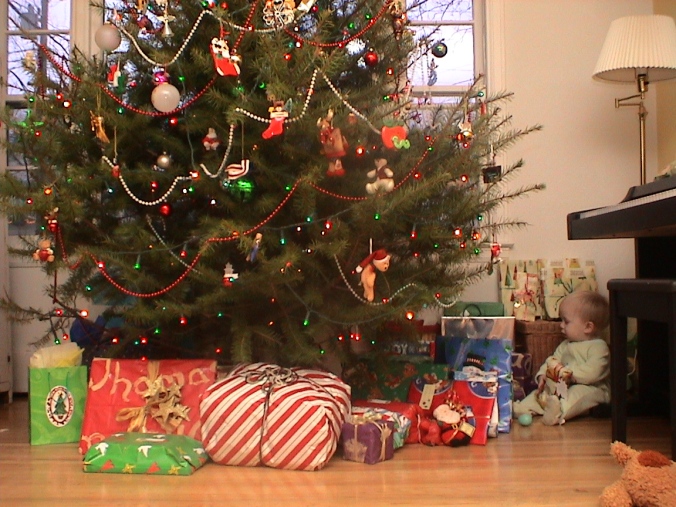